Mealybugs are in the Order Hemiptera (Suborder Stenorrhyncha) and the Family Pseudoccidae.

Like most Stenorrhyncha, Mealybug’s extract fluid from the phloem of different parts of the plant’s tissue for nutrition. Depending on the species, this feeding can take place on the roots, stems, or foliage.

Like some sedentary Hemipterans, mealybugs produce honeydew, which certain ant species can farm.

Mealybugs are sexually dimorphic; males are tiny, winged, gnat-like organisms that are often a fraction of the size of the female. In contrast, most females resemble an ellipsoid nymph covered in a waxy substance with legs anywhere from 1mm-5mm in length.

Mealybugs are known for their association with tropical varieties of plants (mainly house plants) and typically appear in warmer conditions. However, these pests can survive in harsher environments.

Mealybugs are related to scale insects and should be treated with the same rigorous IPM practices.

It is essential to correct the species of mealybug you are dealing with properly. Still, two of the most common ones to find are the citrus mealybug (Planococcus citri) and the long-tailed mealybug (Pseudococcus longispinus).

Mealybug lifecycles vary from species to species, so identification is critical.

Some species lay eggs that are protected in several ways. Some species will lay eggs in clutches, but others will lay single eggs sporadically that instantly hatch. In most cases, eggs are protected by the waxy filament that the adult mealybugs produce. Most species have the potential to make upwards of 500 young in their lifetime. Depending on the species, eggs can hatch anywhere from immediately to over a week after being laid. Newly hatched nymphs often can wait within the waxy filament their parent has produced for them until environmental conditions are favorable.

Female mealybug nymphs often go through three nymphal instars, retaining their legs throughout all, and are often referred to as “crawlers” at this stage of their life.

Most male mealybug nymphs are stationary and cover themselves or a surrounding area in their waxy substance to protect them as they develop into adults.

Mealybug nymph development times are dependent on species but are often influenced by temperature and humidity. Mealybug nymphs can develop anywhere from four to eight weeks in a favorable environment.

Female mealybug adult lifespans are about one to two weeks, depending on species, and often die after egg laying is complete.

Male mealybugs adults come in generations dictated by environmental conditions but often coincide with female populations, and the sex ratio is often species dependent. Male mealybug adults typically only live for a few days and are only used for reproductive purposes.

Mealybugs can produce a waxy filament covering them and sometimes even their eggs consistently, making it difficult to hit them with sprays.

Certain species of mealybugs have been known to vector viruses and bacterial and plant pathogens.

On top of feeding damage, if their excrement, or honeydew, is unchecked, a fungus known as sooty mold can grow on this byproduct. This can make the plants unattractive and, in extreme cases, can inhibit photosynthesis.

With some species, the female can get into crevices in pots, underneath benches, or wherever else she moves before turning her whole body into an egg sac. This means that the crawlers don’t necessarily originate from the plants, making them even more challenging to kill.

Scout existing material for the waxy mealybug adults or eggs. Mealybugs are typically looking to feed near major junctions on plants, where nutrition is flowing at its highest density.

Because of their propensity to wander off plants, sanitation of the space and equipment with a conventional on-label oil product, where realistically applicable, can help reduce lingering mealybug populations.

The mealybug species, along with environmental conditions, will dictate how effective the predatory beetle, Cryptolaemus montrouzieri will be at predating on them.

Cryptolaemus can be used when mealybug populations are at a moderate level but will never catch up to major outbreaks.

If Cryptolaemus is not a viable option, or if they were tried and failed to reduce the mealybug population, lacewing larvae (Chrysoperla) may work better.

If the mealybug infestation is high, and on-label oil application before introducing biocontrol agents is often required. 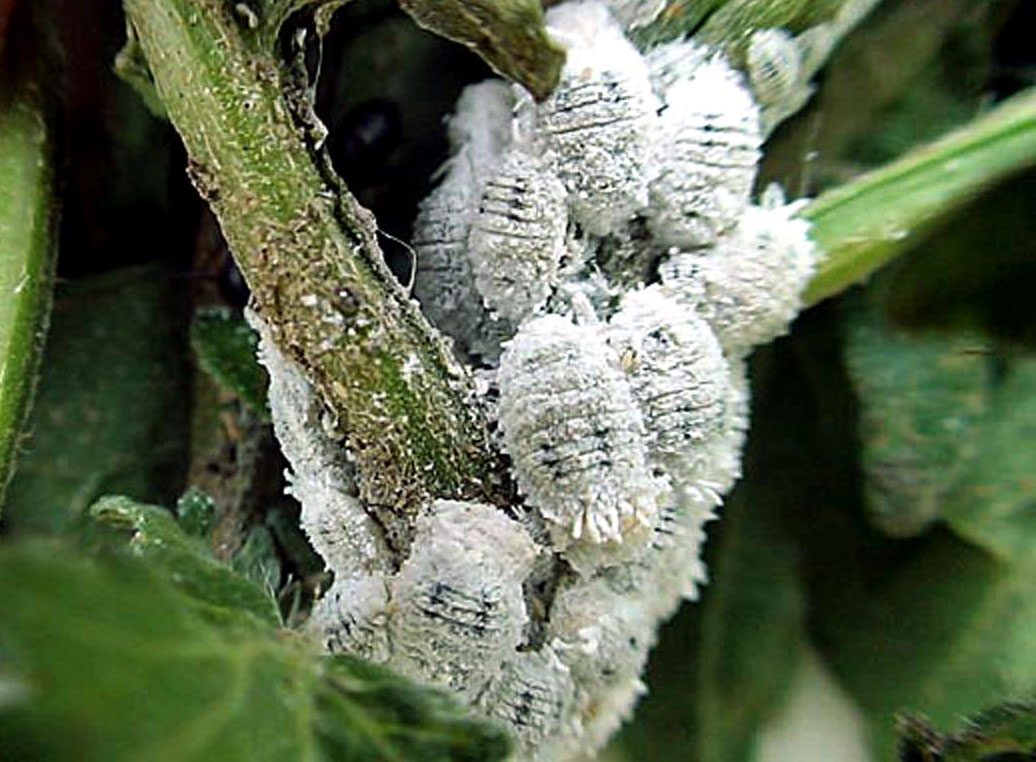 (Cryptolaemus montrouzieri) These outstanding beetles destroy mealybug populations and have been known to start on other scale species afterward.

Green lacewings (Chrysoperla rufilabris) are aggressive predators of aphids and other soft-bodied pests. Larvae are ideal for faster control.